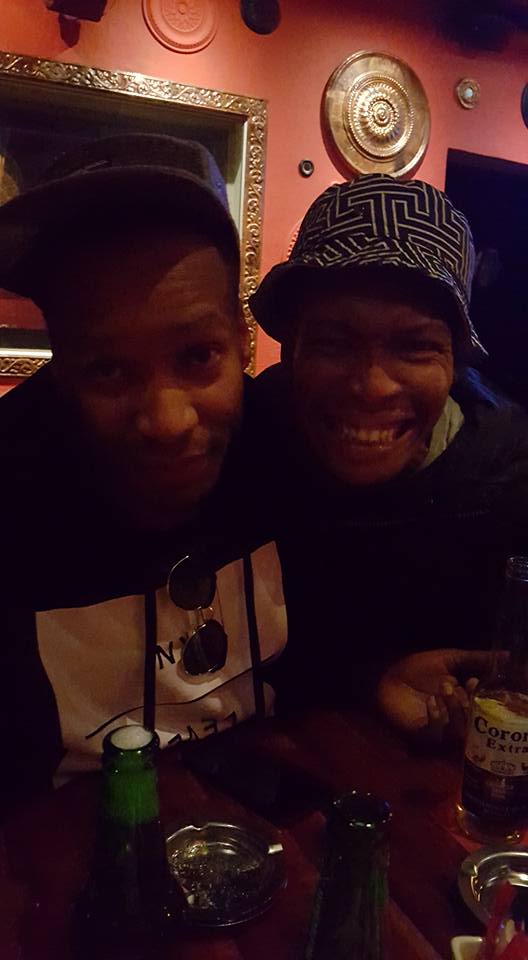 Day 3 in South Africa aka the BEST DAY YET! So me and Teshia didn’t go to bed till.. maybe 7 am from talking in our best South African accents till we ran out of words! Any who this caused us to sleep till.. honestly 130!! We were supposed to have been on a reserve!! So up we were with quick showers (if 2 hours is quick😀) and located extra things to do.. bus tour down town, lion park so we could touch them and get pics, market… we had time but first we were hungry and that’…s were this day ended…. BUT NOT!!

we were walking the streets lined by restaurants looking for FOOD!! we were so hungry. Dodging the many requests for change and American HUGS we made it to a promising restaurant called Hells Kitchen (no relation). We passed by two guys exclaiming “you must not be from here” I gently smiled and kept walking as we needed to eat!! After finding out that there was no food being served we exited only to pass those guys again. I chose to speak this time asking where I can get good food!!? They sent us to a restaurant down the block w promises to join later

LET ME TELL YOU! The waiter was amazing! He actually ordered for us and everything I tell you EVERYTHING was delicious and it only cost us 410R!! When we were finishing the guys showed up and sat down with us… we learned how to properly pronounce African words and names (except Mahlolo.. sorry friend) we discussed marriage, unity and intentionality in relationships. Jesus, THE IMPORTANCE OF SHAKA ZULU AND WHY WE MUST MUST MUST LEARN, music… BTW they believe that Americans favor trap music cause we intake too much sugar! 😂😂 COLORED PEOPLE no really it’s a race of people w their own culture. Why I should vote for DMX and not Trump!! They gave us lessons on the structure of their families and learned why you give money to the wife’s family for her hand in marriage!! LISTEN GUYS MY MAMA NEED THIS SCHMONEY!! she did good lol!! Too many fun moments to name.. like really we were there forever. One left and then 4 more arrived THEN…

They invited us to come have game night… we mulled it over and… JOINED THEM OF COURSE!! they had a nice house located in a quaint neighborhood and played a game called 30 seconds. It’s like guesstures.. no like Taboo but African related and it was a blast!! Of course my team won and certainly we made friends for life tonight!